At its regular meeting on April 16, The Colony City Council approved $1.5 million in funding for improvements to the electrical instrumentation and controls for two of the city’s four pump stations. Pump stations are located near each of the city’s water towers and perform a simple function implied by the name: They pump water through the water distribution system.

It may sound simple but those stations are critical components of the city’s infrastructure. Combined, the four stations help pump almost 6 million gallons of water through the system each day. The price tag isn’t cheap and it’s the kind of project that may not get much fanfare but it couldn’t be more important to the city’s overall mission in service to its residents.

“These are the types of large-ticket items that are absolutely necessary. Cities all over Texas have to do these projects in order to keep up with the services the cities are responsible to providing their residents,” Council member Richard Boyer said at the meeting. “[Projects like this are] needed items but they’re not necessarily the things people see as amenities. They’re basic responsibilities.”

Much of the equipment at the stations pegged for improvements (Nos. 1 and 3) has been in use since the city’s formation in the late 1970s and early 1980s, meaning their electrical infrastructure is antiquated, in particular. Aging equipment not only increases the odds of something breaking down, it creates a potentially unsafe environment for employees. Public Services Director Evan Groeschel said the upgrades will give city staff better access to the stations and provide more safety, reliability, operability, and efficiency.

Improvements to Pump Station No. 1, located near the water tower on Clover Valley, total $70K and primarily include installation of an online water quality monitoring station that will enable operators to observe and respond to water-quality changes in real time from the control center at Office Creek Pump Station. An operator at Office Creek, which is staffed 24/7, could then adjust the chlorine levels at Station No. 1, for example, should that chemical’s concentration peak or dip.

Improvements to Pump Station No. 3, located near Fire Station No. 2 on North Colony, are more extensive. In addition to the same water-quality monitoring station as Pump Station No. 1, significant upgrades to the station’s actual structure, power supply, and security features are scheduled. The total cost for work at Pump Station No. 3 is $1.45 million.

These improvements are just a few among many currently underway within the city’s overall water and wastewater services, including a $2.8 million project to replace a mile of sewer lines; cleaning and repainting the Office Creek storage tanks; and other ongoing maintenance to the city’s wells and water towers. 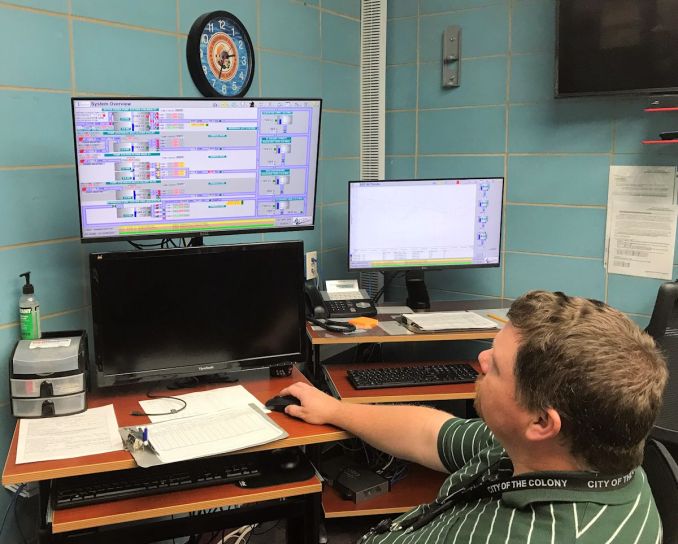 Operators at the Office Creek Pump Station can monitor water quality throughout the city’s water system. Soon, they’ll be able to make remote adjustments to the water at multiple off-site pump stations.

Phase 1 of an $18 million expansion at the Stewart Creek Wastewater Treatment Plant (WWTP) began in 2016 and was wrapped up earlier this year, bringing the plant’s treatment capacity up to 4.5 million gallons per day. The plant will eventually need additional expansion in order to reach build-out capacity of 6.1 million gallons per day in concert with continued growth and economic development in the community.

Back in March, the City Council approved $2.5 million in funding for design services and engineering of WWTP improvements Phase 2A, which will upgrade the plant’s “dewatering” facility to build-out level. Dewatering helps to facilitate separation of the solids and liquids, and enables disposal of the plant’s byproducts. Currently, the dewatering facility operates 8 to 10 hours per day, 7 days a week. Normal operation is approximately 4 to 5 days a week, 5 to 6 hours a day. Engineering should take about a year, with 15-18 months of actual construction.

“Without the ability to dewater the solids and dispose of the byproduct, the plant would, in effect, lose the ability to treat wastewater,” Groeschel said. “Those reasons, combined with increased flow of solids due to Phase 1 expansion, make improving the dewatering facility a critical next step.”