When September rolls around each year, many folks are eagerly anticipating “cooler” weather as fall arrives or absorbing themselves in the start of a new football season. But for city governments throughout the state, September is crunch-time for arguably the most important component of municipal management: the annual budget.

The fiscal year runs from Oct. 1 to Sept. 30. While September marks the end of the process when the City Council approves the final budget as prepared by City Administration, the process begins in the spring when the Council meets for its annual retreat. That’s when priorities for the coming year are established.

Often times those priorities carry over year to year. Two things are consistently atop the list: public safety and roadway maintenance. On the former, it’s primarily a question of working to ensure that response times for emergencies trend downward. That means providing The Colony Police and Fire departments with the necessary personnel, equipment, and facilities to perform their duties. 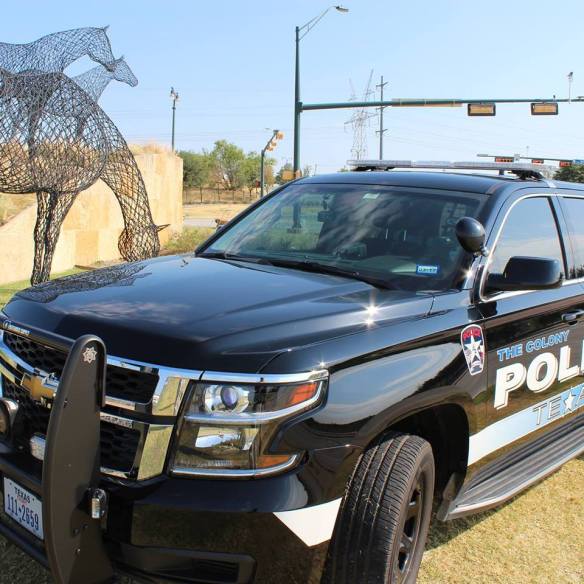 Providing public safety and emergency services personnel with the tools they need, such as fully equipped and reliable patrol vehicles, is always a budget priority.

The 2018-19 budget, which the City Council approved on Sept. 18, includes funding for six new paramedics, an assistant fire marshal, and four new patrol officers. Six new vehicles are being added to The Colony Police Department fleet as well – four new Chevy Tahoes for patrol officers that will replace the last of the department’s aging Crown Victorias; and two Ford Tauruses for detectives.

The budget also includes funding for construction of Fire Station No. 4, which will start taking shape this year at the corner of Plano Parkway and Destination Drive. Station No. 4 will serve as the new operations center for The Colony Fire Department. It will be about 22,000 square feet in size, include five bays for TCFD apparatus, and be equipped with the latest fire services and EMS technology and equipment. It is estimated to be completed by the end of 2019. Plans are also in the works for Fire Station No. 5, to be located in The Tribute area.

The Colony Fire Station No. 4 is being built this coming year at the corner of Plano Parkway and Destination Drive.

As for roadway maintenance, the city typically budgets about $5 million per year for significant repairs to residential streets and alleys. In 2018-19, $4.5 million will go toward fully reconstructing the following roadways: Thompson Drive from Blair Oaks to John Yates; Darby Lane from Strickland to Hetherington; Baker Drive from Petit to Morning Star; Blue Glen from Amhurst to Clover Valley; and the Melroy alley.

Street reconstruction is funded as capital improvement projects (CIP). The city hires contractors to oversee major projects of that nature, which are different than routine repairs to sidewalks and potholes. Those repairs are handled mostly by the Public Services Department’s “hot shot crew,” which goes into action based upon documented requests from residents and day-to-day observations of city staff on patrol through the community.

Outside of major reconstruction projects, the Public Works crews handle much of the street, sidewalk, and alley repairs in the city.

Beyond emergency services and roadways, another consistent budget priority is improving the city’s water, wastewater, and stormwater infrastructure. Each year, the City Council specifically directs city management to keep up with infrastructure maintenance. The longer a project is delayed, the more it will cost to undertake when it finally begins.

In 2018-19, important maintenance and upgrades to the city’s stormwater infrastructure take center stage. As the city continues to develop and grow, there is an increase in the city’s total amount of impervious surface area, which increases stormwater runoff. More flow means more wear and tear on the system and more erosion along streams that funnel runoff into the lake. Development in adjacent communities that feed The Colony’s creeks and streams as well as extremes in weather conditions also contributes to the volume.

This past year, the Engineering Department has been overseeing a project to stabilize the banks of the stream along Taylor Street, north of the Aquatic Park.

For example, many residents may be familiar with the repairs currently underway to the stream bank along Taylor Street behind the Aquatic Park. There’s about $2 million worth of similar stormwater CIP projects included in the 2018-19 budget.

As for wastewater infrastructure, Phase I of the Wastewater Treatment Plant (WWTP) expansion is expected to be completed by January 2019. The new budget includes funding for the engineering and design work for Phase II of the expansion. Reconstruction of the North Trunk Sewer Line, one of the city’s primary conveyors of wastewater to the WWTP on East Lake Highlands, will get underway this year, too, at a cost of about $2.9 million.

Whatever the project, City Administration often hears concerns from residents regarding the costs and pace of infrastructure improvements. Yes, there has been significant economic development within the community in recent years that has grown the city’s budget but that was not always the case. Many important CIP projects (which are collectively funded with revenue leftover after accounting for basic operating expenses) have been delayed in the past for lack of funding prior to economic development.

The City Council has also voted to lower or hold steady the property tax rate for 18 straight years as development has begun to shift some of the tax burden from homeowners to commercial properties. Still, the city boasts healthy balances in all its “rainy day funds” as well as excellent credit ratings from Moody’s and S&P, indicating the city is doing a good job managing its finances.

Throughout the budgeting process, the city is required by state law to adhere to truth-in-taxation practices, which include posting notice when revenue in the new budget exceeds the “effective tax rate.” The effective tax rate is the rate necessary to generate the same amount of revenue as the previous fiscal year on the same properties (excluding new construction and new properties).

Budgets that exceed the effective tax rate are not uncommon, especially in growing communities such as those throughout the North Texas area. The City of The Colony’s 2018-19 budget is the first under the current City Administration in which the effective tax rate was not exceeded, indicating the city’s revenue and expenses are lining up as best they can.

With Scheels All Sports, Galaxy Theaters, and Andretti’s Indoor Karting expected to open in 2019, among other big-name developments, the city’s revenue is anticipated to continue increasing alongside increasing demands for maintenance and infrastructure improvements throughout the community. The city’s leadership also hopes to continue putting downward pressure on the tax rate and explore the possibility of homestead exemptions in future budget years.