The single biggest event in the city’s history tees off in just a couple weeks. Starting Monday, April 30, and running through Sunday, May 6, the Volunteers of America LPGA Texas Classic is bringing 144 of the world’s best golfers to the Old American Golf Club.

As of this posting, 17 of the circuit’s top 20 players have committed to the event, in which players will be competing for a $1.3 million purse in a four-round, stroke-play tournament. This is the only LPGA event held in Texas and it will be broadcast live on the Golf Channel, meaning the eyes of the world will be on The Colony!

The City of The Colony and the Old American Golf Club will be hosting the Volunteers of America LPGA Texas Classic April 30 to May 6.

The first few days of the event will include various pro-am tournaments, practice rounds, and some private functions. The golfers hit the links in competition starting Thursday morning, May 3. The full schedule of events is available on the tournament website. Tickets are available online at a cost of $15 each per day or $25 each for the whole week. Children under 17 are admitted free with a ticketed adult. Active or retired service members also are free with a valid ID.

Ever since the tournament’s relocation to The Colony was announced in October 2017, city staff members have been working furiously (and in concert with event organizers from Octagon) in preparation. Diane Baxter, Director of Communications & Tourism for the city, said hosting the VOA-LPGA Texas Classic will further put The Colony “on the map.”

“This is huge! It’s the biggest event we’ve ever held in The Colony,” she said. “We have great events that our residents always enjoy, but this will bring in visitors from around the world. That alone is immensely significant and gives people the chance to recognize what a great golf community we are.”

The Colony Convention & Visitors Bureau has been the heavily involved since Day One.

“After the initial excitement of hosting an international event set in, the reality of the exposure and economic impact of this event was realized.” Baxter said.

“Upon meeting with the organizational staff from Octagon, who has tremendous experience hosting successful tournaments, we quickly discovered that together we make a great team. Their guidance and communication has been well received. The event has definitely taken over our focus but it’s been a tremendous learning experience as well.” 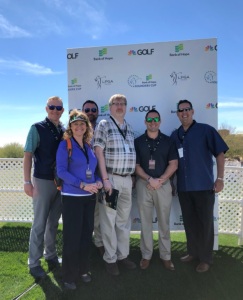 As part of the overall preparation, City Manager Troy Powell, Fire Chief Scott Thompson, Mike McCabe from the Old American, and Baxter visited Phoenix in March to observe the LPGA Founders Cup and see how things work behind the scenes at an LPGA event. “That was quite a privilege to witness the operational side of the tournament, and meeting with city staff members in Phoenix was extremely beneficial,” Baxter said.

City staff members here in The Colony have been equally cooperative. When called to action, the response from every department has been the same: “Tell us what you need and we’ll make it happen,” Baxter said. “That’s been the approach of city staff. Every one of us is behind this. The mindset is to be successful and showcase what a great ‘destination city’ The Colony has become.”

Public Safety officials have been very involved. The Colony Fire and Police departments will both have a presence at the event and have been working closely with the LPGA to prepare for all the emergency contingencies that come with hosting an event of this size and scope.

Customer Service has been processing the many permits required while the Finance Department is monitoring expenses. Public Works is providing barricades and cones for traffic, as well as installing asphalt ramps in the parking areas. The Health Department is coordinating with food vendors and the Information Technology Department is helping provide internet service to the event.

The views were mountainous in Arizona but they’ll be lakeside in The Colony when the LPGA arrives later this month.

It’s been a true team effort.

“As the event approaches, we continue working hard to prepare so that everyone has a great time here in The Colony,” Baxter said.

Beyond city staff, the entire community has been eager to get involved. Out of 600 volunteers sought by Octagon, 550 have signed up. Information about volunteer opportunities is on the tournament website.

“The response from the community has been overwhelming,” Baxter said. “Everyone is excited and exploring ways to be involved. Local businesses, The Colony Chamber of Commerce, our hotels and restaurants – all are excited about the influx of visitors and the opportunity to show them the hospitality The Colony has to offer.”

With the tournament taking place in their backyard, The Tribute community also has been particularly supportive, added Baxter, in terms of both providing volunteers and coordinating logistics with Octagon. Some residents have opened up their homes for players to stay during the event. 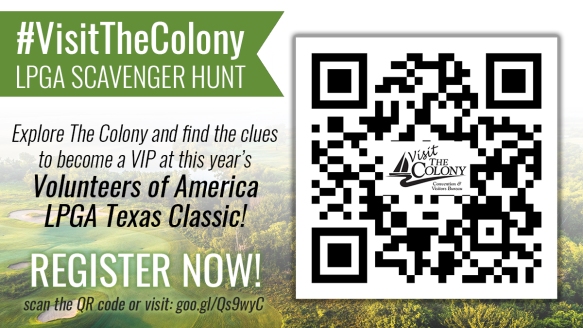 Participate in the CVB’s Scavenger Hunt for a chance to win tickets to the VOA-LPGA Texas Classic!

For its part, the CVB has been actively promoting the tournament. Thankfully, the department’s staff had recently grown to include a new position and an intern. Banners will soon line the light poles along Main Street; a Scavenger Hunt for ticket prizes is underway; social media posts are keeping followers up to date; blogs are providing more details; print ads are going out; media coverage sought; and more.

The CVB’s Mobile Visitor Center was on hand at the recent Spring Eggstravaganza at Five Star to give away three sets of tickets and will have a prominent presence during the tournament. The CVB is providing the backpacks and lanyards for all the volunteers along with swag, information and recommendations for those new to The Colony.

“We want our residents to encourage their friends and family to come experience this together. Help us promote The Colony. It’s going to be a great time,” Baxter said.