As The Colony grows, so do its hike and bike trails. Some brand new sections have already been designed, funded, and are under construction as you read this. Other sections are in various phases of development. But all are incorporated into the city’s Trails & Bikeways Master Plan and should be moving forward this year and beyond.

Most residents are familiar with the Shoreline Trails along Lewisville Lake at Stewart Creek Park and in The Tribute. The city’s network of bicycle paths helped earn the community an honorable mention recognition as a Bicycle Friendly Community from the League of American Cyclists in 2017.

But The Colony’s internal, off-street trail system for bicycle and pedestrian traffic, which has been fragmentary over the years, is starting to come together, too. Eve Morgan, the city’s Park Development Manager, is particularly excited about what’s coming with the Park Loop Trail.

The city’s existing hike & bike system is extensive, with many opportunities for growth.

When completed, the Park Loop Trail will, in fact, form a loop starting in the northeast corner at B.B. Owen Elementary School, going south through Taylor Street Park and the Legends subdivision (where portions of the trail already exist) all the way to South Colony Boulevard, where it’ll go west to Greenway Park near Blair Oaks and then turn north all the way through the utility easement to Squires Drive and back over to B.B. Owen.

One day soon, the Park Loop Trail will connect 11 parks and three schools! For now, each piece must be carefully planned and constructed as time and funding allow. This year will see significant portions take root. Two particular sections are already awaiting construction.

The first starts at the corner of B.B. Owen and Taylor Street and comes south to Taylor ballfields, where it’ll go around the side and back of the parking lot then stop at the greenbelt – for now. At that point, the city’s Engineering Department takes over with a drainage project that’ll be underway soon. Part of that work is going to be putting in a pedestrian bridge that spans the drainage corridor.

The second section awaiting construction (albeit a short one) will start at the alley behind Rearn Drive, run parallel to Squires and connect to the existing sidewalk nearby. So why is Morgan so excited?

The Colony’s Trails & Bikeways Master Plan was compiled with significant input from residents.

“The whole purpose of this part of the project is to get the kids in the neighborhoods south of the greenbelt up to B.B. Owen Elementary safely,” she said. “Now, they have to go through that drainage area or walk all the way around. We need a safe way for them to get across and up to the school. It’s a big part of our overall plan and why we’re prioritizing these sections.”

While full funding and construction have not yet been approved, the design work for an additional phase (Phase IV) of the Park Loop Trail was OK’d by the City Council in January. When Engineering completes the drainage/bridge project, the trail will pick up across the bridge and connect to North Colony Boulevard.

Phase IV also includes the section that starts at Greenway Park and goes north through the electric easement all the way to North Colony. Future plans will fully complete the loop and possibly connect to Frisco’s trail system one day.

Another trail section that has been under construction this year and nearing completion is at Stewart Creek Park. The trail leading into the park is being extended across and along the adjacent roadway to reach the new playground and basketball court. New trees have been planted as well, which will provide a canopy for the trail once they’ve grown in, Morgan said. 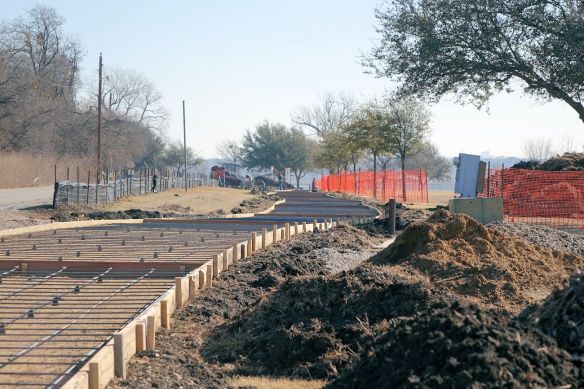 Work has been underway this year on an extension to the trail leading into Stewart Creek Park. Soon, it’ll go across and along the roadway, connecting to the new playground.

Also funded (but not yet under construction) are linkages where the Park Loop Trail connects with North and South Colony boulevards. The project consists of making openings for bicycles to ride to the slip roads along South Colony and widening the sidewalk to trail-width (10 feet) at the parks where there aren’t slip roads. This is so there will be an east-west corridor for bicycles. On North Colony, there will be an opening made at the slip road to meet at the end of Morningstar.

Lastly, one very important piece to the city’s overall trails plan is the design phase. Schematic designs are in the works for a trail segment that will connect The Cascades development to the Grandscape development utilizing the railway underpass corridor. This phase of design will determine the alignment of the trail.

“There’s lots of pieces to put together to get the alignment worked out, and the design will be in multiple phases,” Morgan said. “But we love the direction we’re headed with this project. The future of hike and bike trails in The Colony is now.”