Come meet and greet your elected officials! There will be a reception at 6 p.m. tonight at City Hall, 6800 Main St., to welcome recently elected members of The Colony City Council. The reception precedes the Council’s regular meeting at 6:30 p.m. The agenda is available online. For info about the reception, contact the City Secretary’s Office. 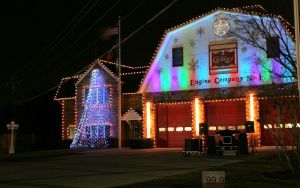 We hope you had a great Thanksgiving! With one holiday behind us it’s now time to turn our attention to Christmas in The Colony. Holiday in the Park kicks off the season this Saturday at Perryman Park with the annual Parade of Lights and The Colony Christmas Spectacular Lightshow. Check out our website for all the details or call Parks & Recreation at 972-625-1106.

The City of The Colony has partnered with Nebraska Furniture Mart and MetroRelief for a seasonal coat drive. Drop-off boxes for new or gently-used coats and gloves as well as new socks for the winter season are located at City Hall (6800 Main St.), the Recreation Center (5151 North Colony Blvd.) and Nebraska Furniture Mart (5600 NFM Drive). The coat drive continues through Dec. 15. Visit thecolonytx.gov or contact Neighborhood Enhancement Office Danny Dill for more information.

Project to shift from reconstruction to beautification

In late July of this year, the Texas Department of Transportation (TxDOT) began the final phases of the Main Street Widening Project. After almost three years of daily, significant road construction, nearly all lanes have since opened to traffic. Some daytime-only lane closures remain for specific elements of the project, including work on sidewalks, medians, and sound walls.

So what’s next? Whereas TxDOT has overseen the actual roadwork all these years, the City will now take on much of the finishing touches in the months ahead. Those touches include steps to ensure the end result of this project is something we can all be proud of as we enjoy smoother commutes up and down the road. 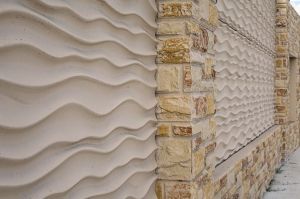 Residents have often asked what beautification elements would be a part of the project. For starters, custom sound walls have been installed by TxDOT next to all residential areas adjacent to Main Street. The wall panels have a wave design depicting the lakeside theme of the community. The stone pattern on the side facing the road is painted to look like real stone while the sides facing residential areas are a tan brick pattern.

Motorists may have noticed the large, open squares at the end of the existing sound walls. That’s where sculptured art panels are being inserted into the walls. TxDOT is installing the panels but the city will maintain them moving forward. Much like the wave pattern, the artwork will feature signature elements of The Colony community. One of the art panels is already installed at the intersection with Ridgepointe Drive. 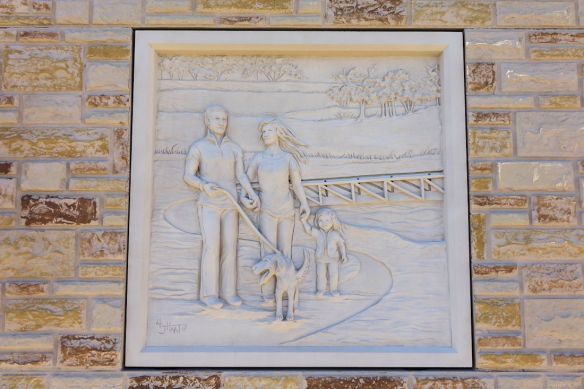 This artwork has been installed in the sound wall at the intersection of Ridgepointe and Main.

Installing new traffic signals at the major intersections has been a significant portion of the project thus far, including ongoing adjustments to the timings of the lights once traffic was fully flowing. When completed, the new signals will have illuminated street signs at each intersection, as well as decorative “clamshell” bases. The new crosswalks at each intersection have also been stamped with a plank pattern designed to look like a boardwalk. 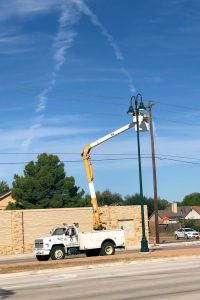 Decorative street lights have been installed up and down Main Street.

Much of the beautification, however, will ultimately take place in the medians. For example, residents would likely have already seen the enhanced street lights, which are different from the standard “cobra-head” lights normally installed by TxDOT.

Landscaping and irrigation will, of course, be a big part of the median work still to come. Fortunately, the design work has already been completed, and the Parks Department has been approved for just under $1 million in grant funding from the TxDOT Green Ribbon Program for installation of the first phase.

Initially, the landscaping will include about 500 trees and some native grasses. Future phases will include a wide variety of plants and additional trees along the parkways. When finished, it will look similar to the landscaping in the medians along North Colony Boulevard between Main Street and Paige Road. 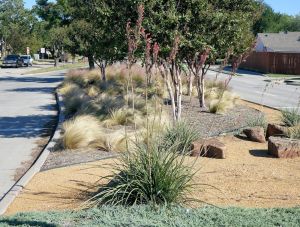 The medians along Main Street will eventually feature landscaping similar to what is currently seen along North Colony between Paige and Main Street.

Lastly, but not certainly least, the sidewalks along Main Street have been connected to the city’s trail system and widened to be more bike- and pedestrian-friendly. Northbound Main Street now features a 10-foot sidewalk between Memorial Drive and North Colony Boulevard. The 10-foot trail then cuts across to the southbound side of the road at North Colony and continues north to the city limits.

Community Services Director Pam Nelson, whose department will be overseeing much of these remaining projects, said the remaining art panels will be installed in the upcoming weeks. The first phase of irrigation and landscaping should begin in the spring of 2018.

“It’s going to take a little while to wrap up the loose ends but beautification is an essential part of the overall project,” she said. “TxDOT built the new road to improve both local and regional transportation but it’s our residents who will drive it every day. We want them to reap the rewards of their patience these past few years by not only traveling a less congested road but also enjoying a much more aesthetically pleasing view along their city’s main thoroughfare.”