Before arriving at Dallas Fire-Rescue Station No. 43  the morning of Feb. 2, TCFD Battalion Chief Garrett Rice was told he’d be taking part in a documentary of sorts about fire services in general, in which he’d be speaking to the importance of firefighters living out their core values. 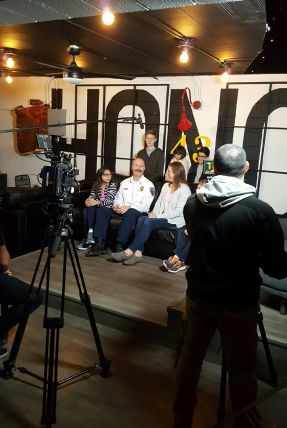 TCFD Battalion Chief Garrett Rice, his wife, Jamie, and their six children sat down for a “documentary” filming moments before they realized the story was really about them.

That was until Sean Lee from the Dallas Cowboys walked through the door. As part of Ford Motor Co.’s “Go Further” campaign to acknowledge unsung heroes, Rice was actually there to receive recognition for the ways in which he represents the “ideals of the fire services and what firefighters stand for,” said his longtime friend Mark Combs, who nominated him for the honor. Combs is a captain with Dallas Fire-Rescue, and is on the team at Station No. 43, which was last year’s “Go Further” recipient.

Four years ago, Rice and his wife, Jamie, adopted not one but four children – an obvious act of love and compassion worthy of admiration. But don’t tell that to Rice.

“We don’t feel special but perhaps it’s a story that moves people, and shows a kindness that we all need to have toward adoption and children,” Rice said. “We felt called to do it. We’re a blessed family. Hopefully this recognition brings a spotlight to the need for foster and adoption families.”

The Rices already had two children, Aidan, who is now 14, and Jack, 10. “But Jamie came to me and said she wanted to adopt, perhaps to have a daughter, in particular,” Rice said. “I told her she was crazy but a couple months went by and one day I did some research and came to understand the need for adoption, especially large sibling groups and special needs. Once I saw the need it was easy to have a change of heart – to see that this was what we were being called to do.”

Dallas Cowboy Sean Lee visits with the Rice family before unveiling an even bigger surprise than his appearance.

Working with Texas Child Protective Services, the Rices learned about four siblings in the El Paso area in need of a loving home. They sold his truck, bought a 12-passenger van, and made the drive to West Texas to meet the children. They spent about a day and a half with the kids getting to know each other a little and then broke the news that Garrett and Jamie would be their new parents.

A week later they were flown to D-FW. “It was really as simple as it sounds,” Rice said. In addition to Aidan and Jack, the Rice family grew pretty much overnight to include Eda, 13; Sean, 12; Mia, 11; and Lauren, 9.

The entire family was in attendance last Thursday at Station No. 43. Meeting Sean Lee was great but the real recognition came in the form of a brand new 2018 Ford Expedition.

“To see the new Expedition was amazing. It’s been almost a week but I’m still unable to process it,” Rice said. “It’ll be an improvement upon the ‘airport shuttle’ we’re driving now. I hardly feel worthy but the kids are worthy of enjoying a new ride with nicer styling and comfort.”

The presentation in Dallas was, in fact, filmed and made into a video available online featuring the new Ford vehicle, their partnership with the Dallas Cowboys and, this year, The Colony Fire Department.

“The adoption was our journey but if you met with members of my department, they’re all doing things just as special,” Rice said. “They’ve all given back to the community where they live and the greater fire services community. I’m proud to represent The Colony Fire Department, which is known nationally for being a department on the cutting edge of firefighting strategy and tactics. I think any of the guys could’ve been me. They all have a story to tell.”