Bad news first: As the case has been in recent years, heavy spring rains and a mild winter have made for a mosquito-breeding perfect storm.

But the good news is that the City of The Colony has one of the region’s longest-standing and well-documented mosquito control programs. When representatives from the Centers for Disease Control and Prevention arrived in North Texas during the West Nile Virus outbreak of 2012, The Colony was one of only a handful of cities able to provide them with useful data as the city had been trapping and testing mosquitoes since 2006.

Community Services Director Pam Nelson oversees the city’s mosquito control program. While there’s been a great deal of media buzz about the dangers of Zika virus, Nelson said the city’s program continues to focus on disease-prevention by combating the spread of West Nile mosquitoes.

“The primary objective of our mosquito-control program is to identify and eliminate breeding sites,” Nelson said. “A wide variety of employees from multiple departments, including Public Works, Parks and Recreation, and Community Image, routinely patrol the city to keep an eye out for potential breeding sites on public property.”

This is in addition to already monitoring known hot-spots for mosquitoes. In conjunction with its contractor, Municipal Mosquito, the city conducts weekly testing from May to October each year at eight rotating sites around the city.

“Most issues, however, are on private property,” Nelson said. “It’s the responsibility of our residents to protect themselves and help curb the mosquito population by letting us know about problem spots and by draining standing water on their property.”

This ditch is typical of the water that accumulates during heavy rains. Parks staff treat these pools with mosquito dunks.

Nelson said hot-spots are always changing, however. She encourages residents to contact the city at 972-624-3160 to report areas of concern, be it on public or private property. The city has a web-form accessible to all employees so they can take down the relevant information, which is automatically funneled to mosquito-control staff.

Patrick Prather, chief entomologist for Municipal Mosquito, echoed Nelson’s concerns about all signs indicating an early spring and an early start to the mosquito season. Some municipalities in D-FW have already trapped mosquitoes found positive for West Nile.

The first question he gets this time of year is always the same: When do we start spraying?

“The answer is, when there’s a positive test for disease in a mosquito,” he said. “The program we have here in The Colony is a disease-based response program, which includes surveillance, larvaciding, and judicious adulticiding when required.”

In 2015, there were 16 batches of mosquitoes that tested positive for West Nile virus in The Colony. There were six in 2014 and one in 2013. Testing so far this season has yielded negative results.

One might think the city’s proximity to Lewisville Lake would be a problem but mosquitoes cannot breed in water sources full of predators (aka fish) that consume their eggs, Prather said. The main concerns are standing pools of water: low-lying areas, flower pots, old tires, trash cans – anything where rain water, irrigation runoff, etc., can accumulate.

The mosquito species responsible for spreading West Nile is culex quinquefasciatus, a small brown- or tan-colored insect. The culex mosquito lays its eggs in a raft on the water’s surface. They breed asynchronously, meaning their population will fluctuate on a daily basis depending on the availability of breeding sites, Prather said. 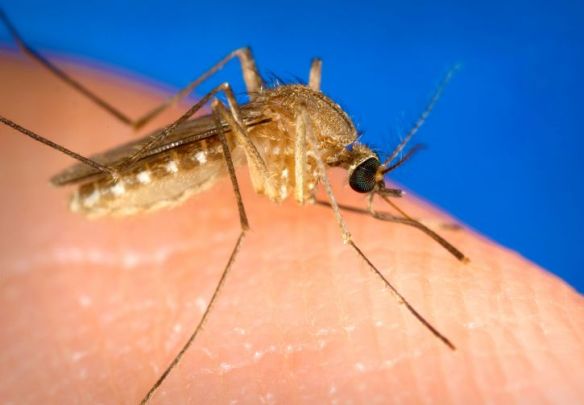 The culex quinquefasciatus mosquito is brown in color and responsible for spreading West Nile virus.

Male mosquitoes feed on flowers but female mosquitoes require protein from a blood meal for egg development. According to Prather, the culex is known to travel up to a mile’s radius from its breeding site to find its blood meal. Birds and small mammals are their preferred choices. The reason they are more active at dawn and dusk is because that’s when birds come and go from their nests.

Birds are carriers of both West Nile virus and St. Louis Encephalitis. Mosquitoes feed on the birds, and then pass the diseases on to humans. Unlike Zika virus, which can be passed on through sexual transmission, humans cannot pass West Nile on to other humans except in very rare cases.

Mosquito eggs are so well-protected they cannot be killed by chemicals – only controlled by eliminating breeding sources. Mosquito larvae and pupa, however, are vulnerable to larvacide. Adult mosquitoes are also treatable, again, when disease has been confirmed in an area of the population.

Before the spread of Zika virus to Texas, any species other than culex, such as aedes aegypti, was considered a “nuisance mosquito.” But now we know the aedes species is a carrier for Zika. Unlike culex, the aedes is aggressive any time of day and typically bites below thigh level, Prather said. The aedes is also small but typically dark-colored with white spots or stripes.

Aedes aegypti mosquitoes are also known to carry Chikungaya and Dengue fever. They will only travel about 200-500 feet for a blood meal, which includes humans. They do not require nutrient-rich water for breeding but rather can lay eggs in any kind of container home to organic matter, such as trash cans. 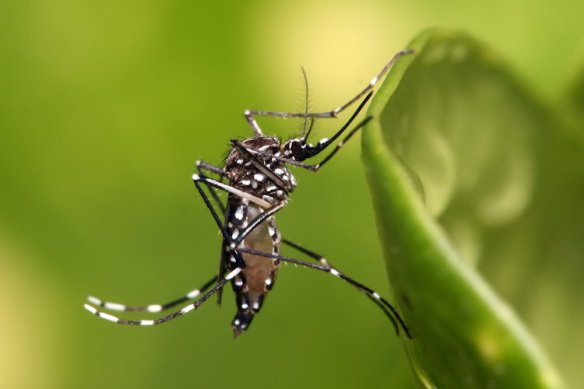 The aedes aegypti mosquito is dark with white spots, and can be a carrier of Zika virus.

While the science is still catching up, Zika is believed to be primarily dangerous for pregnant women given the reported links between Zika and certain birth defects. However, while there have been two cases of travel-associated Zika virus in Denton County, there have been no local cases of Zika transmission.

Regardless of the mosquito type, residents are encouraged to follow the “Four Ds” of mosquito-borne disease prevention:

For additional information regarding mosquitoes and the City’s mosquito treatment plan, contact Nelson at 972-624-3958, Chemical Applicator Shane Bartel at 469-853-1222, or visit the city’s mosquito control page.

To report standing water on private property, please call 972-624-3160, and be sure to provide an address associated with the issue if leaving a message.