As the spring storm season continues, residents are advised to remain mindful of the weather and prepare themselves in case of weather-related or man-made emergencies.

The City of The Colony has a wealth of useful information on its website to help you prepare for severe weather, including basic preparedness plans, tips on how to build a variety of emergency kits for different situations, and a page-long listing of emergency preparedness resources.

Suggestions for emergency kits also include those for individuals with disabilities and/or special needs as well as pets. 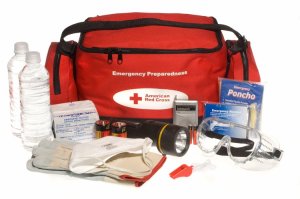 More info about this Red Cross preparedness kit is available at http://www.redcross.org/get-help/prepare-for-emergencies/be-red-cross-ready/get-a-kit.

The Colony’s Emergency Management Coordinator, Travis Calendine, is also available to speak at your school, church or other organizational function on how to be prepared for an emergency.

Fire Chief Scott Thompson often stresses the importance of residents utilizing a NOAA Weather Radio as the first line of defense in preparing for severe weather, rather than relying on outdoor warning sirens.

“Outdoor sirens are not a reliable means of notifying people who are in their homes and they should not be considered as a means of early indoor notification,” he said. For more information about sirens, please see our Outdoor Warning Siren FAQ.

“Obviously no one can control the weather, but we aim to do everything in our power to help you be prepared, and then to be there for you in case the worst does occur,” Thompson said.

Case in point: March 8, 2016, started the same as many spring days in The Colony. As is the case across North Texas this time of year, strong storms can develop quickly, and The Colony Fire Department’s Emergency Management team was keeping a close eye on weather conditions that morning.

“I was monitoring the weather at Fire Station No. 3,” Thompson said. “We were not in a tornado watch or warning box, so our primary concerns at the time were wind, rain, and lightning.”

Before long, those concerns proved well-founded. At approximately 8:30 a.m., a severe storm front with high winds and hail crossed over The Colony causing scattered damage to homes, power lines, trees, and two schools.

The first report came from Calendine, who informed Chief Thompson that amateur radio traffic indicated serious damage to structures southeast of Paige Road and North Colony Boulevard – areas that were later pinpointed as being on King, Adams, and Ramsey drives, as well as other nearby streets.

TCFD units, including Chief Thompson, were immediately dispatched to the area. “When units arrived on scene, they found several houses with damage and initiated a primary search for trapped or injured occupants,” Thompson said. “At that time, we began to receive reports of damage to other areas of the city.” 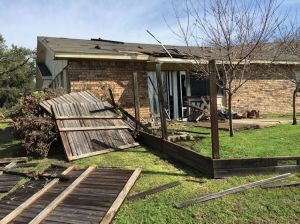 This was one of several homes in The Colony to sustain serious damage during the strong storms on March 8.

A command post was soon established at Central Fire Station for the purpose of tracking damage and managing resources. Thankfully, no fatalities or injuries were reported. TCFD personnel were able to help safeguard property by putting tarps on homes with roof damage, for example.

The Colony Police Department provided immediate security in the affected locations while the city’s Public Works crews began clearing debris from the roadways.

Television news media soon descended on the city to report on the damage. Police Department spokespersons on the scene conducted interviews. Back at the command center, the Communications Department helped respond to media inquiries while also distributing status updates to residents and engaging on social media in an effort to collect additional damage reports.

Within eight hours of the storm’s initial impact, the incident was stabilized and under control, Thompson said. Security remained a concern, so TCPD maintained watch over affected neighborhoods in the days that followed.

The Fort Worth Office of the National Weather Service conducted a survey of the damage the day after the storm.

The Fort Worth office of the National Weather Service would later conduct a damage assessment and determined the area around Arbor Glen Road and The Colony High School was impacted by straight-line winds between 90 and 95 mph, while the area around King Drive had similarly strong winds mixed with a brief EF0 tornado.

All told, 154 homes in every corner of the city and two schools, Camey Elementary and The Colony High School, were damaged that day. Most of the damage was minor but four homes were uninhabitable. Those residents received Red Cross assistance and were given shelter at local hotels.

Looking back, Thompson was pleased with the city’s response to the crisis, and credited everyone who responded for successfully implementing the city’s multi-agency emergency management plan.

“There was cooperation between all involved departments, and requests and demands for assistance were handled with urgency,” he said. “This was an all-hands-on-deck situation and everyone involved stepped up to minimize the burden of this event on those impacted.”