The numbers are in. It was yet another successful City-Wide Spring Clean-Up. Hundreds of residents took advantage of the opportunity on April 18 at Hawaiian Falls to unload 102 tons of trash and debris, 160 cubic yards of green waste, 9,107 pounds of documents for shredding, and 14,474 pounds of electronics for recycling.

102 tons of trash and debris, 160 cubic yards of green waste, 9,107 pounds of documents for shredding, and 14,474 pounds of electronics for recycling were collected during the Spring Clean-Up on April 18.

Environmental Services Manager Terry Gilman said it takes about a month for the city to prepare for the four-hour whirlwind that is the annual Spring Clean-Up. The event has evolved over the years, moving locations and adding more services, like document shredding.

Primarily, the Clean-Up is about offering residents of The Colony a convenient means of disposing trash and refuse, such as large tree limbs, furniture, appliances, lumber, remodeling debris, fencing materials and scrap metal.

Freon is safely removed from refrigerators, stored, and shipped to the EPA for recycling. On April 18, 15 appliances were drained. Ninety small truck, car and SUV tires are also collected.

While there are costs associated with the event, “you can’t put a value on the service,” Gilman said. Including the annual Fall Clean-Up events, this was Gilman’s 25th clean-up.

The city partners with its solid waste and recycling vendor, Republic Waste Services, for the Spring Clean-Up. Roger Bianci was one of dozens of Republic employees roaming the Hawaiian Falls parking lot to help residents unload their truckloads of materials for drop-off. He said he was more than happy to be working on a Saturday and valued the opportunity to get face-time with his customers.

“We’re out here trying to show The Colony what it’s all about,” Bianci said. “We’re going above and beyond, just trying to help out the community.”

Resident Bobby Ellis brought four truckloads of brush and yard clippings. Like many other participants, he said he puts the event on his calendar every year and starts planning for it about a month ahead of time.

“We appreciate it. We enjoy the service,” he said.

“We cleaned up the church with the Boy Scouts last weekend and had it loaded up already,” she said. “Then I went back and got my personal stuff. I really appreciate it. It made it very easy. We know it’s coming up and plan for it.”

Enough electronics were collected for recycling to fill the trailer of an 18-wheeler. A second truck was needed to collect the rest.

Other residents didn’t necessarily plan for it but found a way to take advantage nonetheless. Aaron Elgersma dropped off debris from a tree he cut down in the winter that had been sitting in the back of his house for months.

“I was driving by (and saw the traffic), and remembered I got the email and then I brought it out,” he said. “For sure I’ll plan for the fall now that I know what I can dump. It really helps. Otherwise it just accumulates.”

Perry and Brandy Fisher were also last-minute participants, having remembered about the Clean-Up the night before. They got to work cleaning out their garage in the morning for the first carload then planned to return with debris from the backyard on the second trip.

“We even told our neighbors, who moved here from down south, to make sure they knew about it, too,” Brandy said.

Resident Rosanna Morgan said the shredding service saves her money. What would normally cost about $25 per box is shredded for free at the Spring Clean-Up. “I do it every time there’s a clean-up,” she said. “I definitely plan for it. As we see little things to throw away, we organize them in our garage, ‘OK, this is going the next time.’ We definitely appreciate it.”

Document shredding was one of the many services available during the city’s annual Spring Clean-Up on April 18.

Ken Rector and Mike Rowan brought a trailer-load of lumber that was once a backyard shed. Rowan said they started planning about a week ahead but weren’t sure if they’d get the shed knocked down in time.

“We even had a landfill pass for it but now we can use that for something else,” he said. “It’s very convenient. Look at the time it saved us.”

As residents enter the Clean-Up, they also have the opportunity to donate to the Metro Relief food pantry. This was a feature introduced during the Fall Clean-Up in 2014. Director of Pantry Services Gina Benson-Harrison said the agency is serving between 130 and 150 families a week. Donations collected during the clean-ups are particularly helpful in advance of the holidays in the fall and after the holidays in the spring.

“This is fabulous. This particular time of year, April to October after the holidays, we have to go out and buy food so this food drive is huge for us right now,” she said. “Even if it’s only a couple days’ worth of food, it’ll help us not have to go out and buy retail. That’s where we use funds that have been donated to help stock the pantry.” 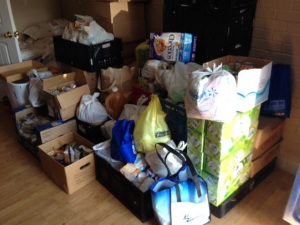 About 1,700 pounds of canned goods and non-perishable foods were collected during the food drive at the Spring Clean-Up.

In addition to boxes and boxes of canned goods and other non-perishable foods totaling 1,700 pounds, Benson-Harrison said they collected $235 at the clean-up. “It was a huge success,” she said. “I estimate that we doubled the amount of food from last fall, and the cash is a true blessing.”

Story by Blaine Crimmins, communications specialist with the City of The Colony.