Among the core values instilled by Fire Chief Scott Thompson is preparedness – mentally, physically, mechanically, and procedurally. As seen recently in the media and the city’s electronic newsletter, The Colony Fire Department has begun utilizing its own training yard to sharpen the skills of its firefighters and further its preparedness goals.

The yard, located on East Lake Highlands Drive, has been a couple years in the making, and features some elements custom built by the department’s own members. Before the yard’s construction, TCFD would have to conduct annual training trips to facilities outside of The Colony.

“We’ve always wanted something in our own city,” said Brent Young, Battalion Chief. “Not only is it more convenient, but it’s a pride thing. We’re The Colony Fire Department – we want our own stuff.”

Young led the latter portion of what was truly a team effort in constructing the facility. The brainchild of now-retired Battalion Chief Tab Bradburry, building the yard utilized the metalwork, carpentry, and welding skills of the department’s firefighters. The city’s Facility Maintenance staff also played a key role, helping with the permitting process, fencing, and lining up qualified contractors to bring the department’s vision to life. 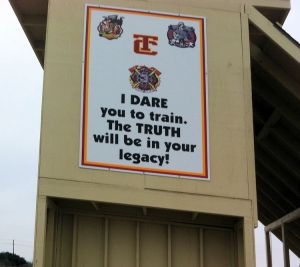 This call-to-action signage inspires the firefighters training at the new yard, and features the logos of the city’s three fire stations.

“City staff members Terry Gilman and Brian Blythe were phenomenal in helping pull it all together,” Young said. “They understood how we could get this done and for how much. I can’t say enough about how helpful they were.”

The yard has been operational since December. It currently features 10 training “props” or drills, with others planned for future development of the facility. Firefighter rescue and survival drills include simulating scenarios in which firefighters or fire victims are trapped in a below-grade space, a second story, or otherwise confined location where access or egress may be difficult.

“There are many fires throughout the country where guys are up on the second floor, conditions change, and they have to exit immediately,” Young said. “The window is one way to go. If there’s a ladder, we have our best practices for using it. If not, there’s ways you can hopefully get out a little safer than just jumping.” 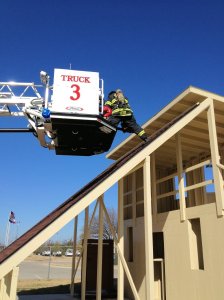 A firefighter from The Colony engages in a drill from the bucket of the department’s ladder truck. The steep pitch on the roof simulates a common pitch in many of the newer homes in the city. Future additions to the yard will incorporate a rooftop with a less steep pitch.

There are also confined spaces on the ground level that firefighters occasionally encounter in a residential structure. Again, conditions change, and the way they came in may not be an option so they might have to do what is called a wall breach, where they break through one room to get into another room, which might have a safe exit.

“Bottom line, if we’re ever in a situation like one of those, we can use the yard to show rookies how we do it,” Young said. “We demonstrate the different ways and techniques, then discuss what worked and what didn’t work.”

One of the custom-built props is for practicing forcible entry. A double-sided steel door that opens both outward and inward was installed into a frame with a reusable, wooden locking mechanism. A similar item for purchase prebuilt could cost as much as $7,000, Young said. But members of the department’s B-Shift truck company built this one themselves. It weighs about 500 pounds and required a little help from the city’s Public Works Department to move it from the station where it was built to the yard.

“Doors open both inward and outward and, depending on the structure, you’ve got to be able to force both using two different techniques,” Young said. “Combined with using the right tools, eventually the wooden ‘lock’ will snap and break, simulating breaching the door. Then we close it up, put a new piece of wood in, and the next crew gets a chance.”

The door frame for practicing forcible entry techniques is shown in the bottom right of this photo.

Young noted that forced entry, especially on commercial, steel doors common to strip malls and shopping centers, causes a bit of abuse to the door. “They get beat up pretty good. But this one is solid and will stand the test of time. I’m really proud of them. I’m halfway expecting that once word gets around about how they built it, we may get calls.”

Like the wooden locks on the door prop, elements of the yard naturally take some damage during the training – but only the reusable elements, not the structure itself. “For the wall breaches, we’ll put sheet rock up on the wall studs, breach that, throw it away, then put a new piece of sheet rock in there,” Young said. The same goes for vertical ventilation drills during which firefighters cut through plywood on the roof.

Whatever the drill may be, there’s no substitute for getting hands-on practice with the tools.

“Where else can we start a saw and actually cut into a roof? It’s just rare we get to do that,” Young said. “The yard gives us the opportunity to do work off a tower ladder, using saws, hooks, and irons. We can work off a ladder on a steep pitch. It’s all a challenge, and it all takes practice.”

Compared to many, The Colony Fire Department is a young department. As it grows alongside the city’s overall economic development, young firefighters join the team. Young said the yard provides a way for senior firefighters to mentor the new guys and teach some techniques they’ve learned over the years.

“The events of Sept. 11, 2001, really united the American fire service,” Young said. “Now, departments like The Colony are plugged in to the history, legacy, and tradition of the national fire services. As we’ve grown, we’ve been in a position to pick best practices and look at these practices over years and determine what works.”

Young added that The Colony has become a unique, aggressive department. Other cities are looking over the fence at the way they’re doing things here.

This image depicts the TCFD training yard during construction.

“That’s a huge point of pride for the guys,” he said. “You want the respect of your peers, and to know that if another city around us calls us for help, they know they’re going to get some hardworking, knowledgeable, and professional guys that will go all the way with them.”

Young credits Chief Thompson, the City Council, and City Manager Troy Powell for providing the kind of leadership that fosters pride and makes projects like the training yard possible.

“It’s our time, this is what we’ve been waiting for, let’s take advantage of it,” Young said. “Guys can’t help but feel the buzz and respond. There’s a sense of urgency. They want everyone in North Texas to know we’re the best. We want to be the kind of firemen you always wanted to be as a kid.”

1 thought on “Point of pride”